The concern is that by adapting gradually to the loss of actual nature and the increase of technological nature, humans will lower the baseline across generations for what counts as a full measure of a flourishing human experience.

The more we rely on an intermediary to communicate, connect, and interact with others, the more we depersonalize being human.  Your well-being depends on not replacing face-to -face connections with technological ones.

The camera was the first technology that was a substitute for the real thing?  Yet, the camera only recorded the past and was no substitute for what was current.  Then the telephone provided a way of connecting in the present, but without benefit of facial expressions and body language .

The other forms that seemingly connected us were silent movies, radio, and movies with sound followed by TV which unlike movies isolated us in our homes instead of in a public space.  This consumed most of the 20th century and catapulted us further away from one to one interactions.

This 21st century dubious improvements gave us the ability to manipulate, edit, and use a time lag instead of spontaneously responding.   With other signals absent the advent of Instagram, messenger, game apps, dating sites, Google, Facebook, etc. is not alike what Robert D. Putnam wrote in his book “Bowling Alone”.

Technology ushered in the era of distancing us from each other.  Face-to-face interactions cannot be manipulated and controlled nor can we avoid responding directly.

What can be meaningful to those of us who don’t live close to family, have a household mate, or have moved away from a long-term home base is to connect to places where groups gather.  Join a book club, or game, or exercise club.  Volunteer in places where interaction is prevalent. Get a pet.

Yes, you can still Skype and call friends and family, but don't let these be substitutes forgetting out and communicating face-to-face!

To read more about this topic is Robert David Putnam's book "Bowling Alone", Putnam is an American political scientist and Peter and Isabel Malkin Professor of Public Policy at the Harvard University John F. Kennedy School of Government.

Kira Asatryan author of "Stop Being Lonely".  She is a relationship coach certified by World Coach Institute 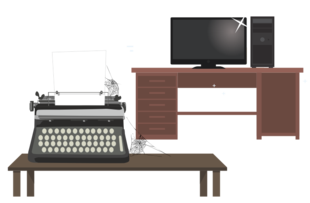 Why is it so hard to tell what’s real
Is it something only to see or feel
With your body not just inside your brain,
Does reality have to be such a strain?

Is reality something you pinch?
Can you stare it in the face without a flinch?
Can you alter it or make it leave?
Can you find it in your hand or up your sleeve?

Can’t reality be a dream come true?
Sometimes it seems like déjà vu.
It matters not if it doesn’t feels real
And sometimes it hasn’t any appeal
Reality often times
Is not much above those heinous crimes
But there’s no denying it when it calls
It can hit you like Niagara Falls

But no matter what it is, you have the choice
To let it go or give it voice
Because unless it’s interpreted by your head
It’s just a bunch of words that can’t be read

​What a downer, until the 19th century we had to rely on seeing each other to communicate.  Then we didn't have to see, smell or even answer the person who was talking to us. Technology changed all that. Now you can annoy anyone, anytime. Ah, the fun of it. I can tell you, you're a jerk and not worry about being punched in the nose.

We used to punish people by sequestering them from others.  Solitary confinement is now a chosen sport.  According to NHAPS we spend 86.0% of our time indoors. This is great for therapists.  Depression, addiction and hoarding spring like weeds with isolation.

Although hoarding doesn't sound so bad to me!  After all what's shopping for?