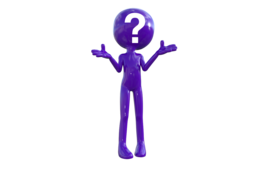 Like counting we do things more sequentially when younger?  Now my mind might be on #1 and jump to #10 so that when I try to regroup, I’m lost.

So big deal, I can’t keep lists of things in my mind.  But of course you can do series, that’s how you get through the day.  The difference is that as you live, you do more things automatically and don’t have to make lists to do them.  You got up today, got dressed, maybe had a breakfast and now doing something like reading this website.  Doesn’t that count for knowing what you need to do to get through a day.

So what if you walked into a room, opened a drawer or picked up the phone and forgot why.  Think of all the things you didn’t think about when you were young and still you made it through a day.
You’re here because you’re here!

Why Am I Here?

Sometimes for the life of me, I can’t remember a person's name even when I've known them for a long time.   I call it blanking.  Scientists tell us this is a normal part of aging.  While these memory lapses are frustrating, most of the time they aren’t cause for worry.

My sister says that when younger, information came to the surface as if it were on an express train, but now the information boards the local.  One way to handle these lapses is just to wait because the information usually arrives, just a little later than usual.

Here are the facts about why we forget.
We have synapses, which are junctions or gaps between two nerve cells.  Information jumps from one synapse to the next.  It’s done with neurotransmitters  and as you age what makes the information jump to the next synapse doesn't fire as quickly.  Like a match that is slightly wet it takes a few strikes to get them to light.
So the information is there and it will come and as my sister says it’s on the local not the express train and if you wait a minute it will cover the distance to consciousness.!!  YOU DIDN’T FORGET

We are capable of producing new brain cells at any age, but like all cells the motto,  “Use it or lose it!” applies.  Significant memory loss is not an inevitable result of aging. We talk about that in the section alternative remedies.

Further, many mental abilities are largely unaffected by normal aging, such as:

While scientists are still debating about which specific neurotransmitters (epinephrine, dopamine, serotonin, glutamate, and acetylcholine) are involved in memory. They have determined that communication among neurons via neurotransmitters is critical for developing new memories. The more you repeat something the more likely it is that the connections aided by neurotransmitters will operate flawlessly.  My mother used to tell us that if you say a word three times it’s yours.  Repetition such as repeating a telephone number three times will make it more likely that you will remember it.

So, if it takes a bit longer to recall something, don't worry, it's normal.

I marched to my kitchen then I didn’t have a clue,
Why I went there; what did I want to do?
Whatever it was had slipped from my mind?
Clueless, I tried to remember what I had come to find.

Just like words that won’t come forth when I speak,
But, stays lodged in my brain playing hide & seek.
What about the dinner I ate with friends I consider dear,
I couldn’t I recall the meal, or the restaurant’s name I fear.

It’s as if there is a sieve dripping out information,
Limiting my ability to engaged in communication.
Because words travel across synapses not like a jet more like a bike
Since like a wet match, neurotransmitters take longer to strike

When young these chemical substances jumped into action in the brain,
That bringing thoughts to the surface required little strain.
But as you age neurotransmitters become like a wet match
That needs more striking times before fire they’ll dispatch.

The next time you’re in the kitchen & think why am I here?
Just give your brain some time eventually it will appear,
Or better yet, enjoy the wait, sit down and have a beer.