Help slow the aging process and prevent illnesses with the audio Telomere, Guardian of DNA

Guardians have to Guard

If we think about it, we have guardians all over our bodies.  The hair on our heads probably evolved to protect us from the sun. Arms protect us when falling or being attacked. Eyelids protect the seeing part of the eye from harm.  I won't go on.

The more evolved a species is, the more guards they have.  We humans with abstract thinking ability (at least some of the time) have invented schools to keep kids out of harms way while their parents do the important work of survival. We invented clothes to protect the body from all sorts of things the least of which are prying eyes.
So why should guardians stop on the surface.  And they don’t. Probably one of the most important part of survival is the fact that our chromosomes reproduce our DNA so that we are kept revitalized like a shower after waking.

Keeping our guardians in top notch condition is the job of telomeres.  The longer they are the easier it is for our chromosomes to reproduce our DNA.  When they become short, it’s not good.  We begin to unravel, age or get sick.  So here’s to keeping tips of our chromosomes from unraveling. Here's to keeping our telomere's long!

Telomeres are part of our bodies inner workings and affect aging and disease.

In the simplest terms telomeres are at the end of a chromosomes and protect the ends of the chromosomes from deterioration or even fusion with nearby chromosomes.

This protection enables the chromosome to protect our genetic data, and makes it possible for cells to divide and survive. As Nobel Prize winner Elizabeth Blackburn’s study of telomeres shows this holds some secrets to how we age and get cancer.

For a delightful scientific explanation of telomeres go to: The puzzle of aging: Nobel Prize winning scientist Elizabeth Blackburn and watch her TED talk April 2017

Shields that Pay Off

Part of the process that makes us age,
Is when our DNA gets to the stage,
When it can’t reproduce and our chromosomes die,
And shrinking telomeres are the reason why.

Like plastic tips at the ends of shoelaces,
This is what a telomere embraces,
In 2009 the Nobel Prize was awarded to she who unearthed,
That it was telomeres that help chromosomes rebirth.

When a chromosome can’t duplicate,
It alters the course of DNA’s fate.
We age, get sick and that’s not good,
And least I be misunderstood.

We don’t want telomeres to disintegrate,
Because they alter a healthy state.
The prescription to keeping healthy as long as we can,
Isn’t an arduous, or difficult plan.

There are simple ways to help telomeres stay strong,
Don’t stress; Nobel Prize winners can’t be wrong.
They suggest you be with people who think you’re great,
And relax, by taking a nap or meditate.

Toss tension out the window it never achieves,
Stresses are well-being's most treacherous thieves.
So here’s to keeping telomeres rock hard
By telling their irritants they are permanently barred. 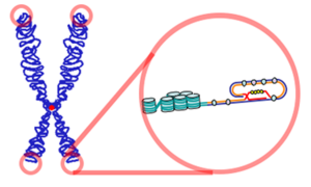