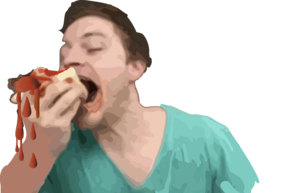 Where did my manners go?
Were they hiding under my bed?
When I forgot about the invitation,
To see Aunt Sophia wed.

I received a truckload of presents,
On the day celebrating my birth.
Yet, I forgot to write thank-you notes,
Such bad form, for what it’s worth?

Seated in the dining room,
Did etiquette get kidnapped?
By a bird carrying my napkin,
That should have been placed on my lap.

Then I slurped a drink down?
All around would have to hear,
Gulping noises from my throat,
Until the liquid disappeared.

I didn’t say, “Excuse me,”
When my chair scraped across the floor
I probably won’t be invited,
To their parties anymore.

Acting rude, or ill-mannered even being quite uncouth,
Seems to be part of the aging process, to tell you all the truth.
Manners, after all,  are nothing but a human invention,
And the older I get, the less I pay them much attention.

Where Did My Manners Go?

It requires effort to enlist manners at the beginning and end of life.  While being impulsive is the hallmark of youth, indifference is the specter of age.  To focus not only requires attention but an ambition to fulfill artificial rules of society.

Ignoring propriety becomes easier after a lifetime of having to adhere to rules.

The Facts
Protocols make living together the predictable.  Humans live in groups, and manners set a standard of predictable behavior.  Imagine, if a stranger greeted you with a hug?  We expect to shake hands with a stranger, not hug them.

While it might be okay to slurp your soup when dining by yourself at home, when dining with others that behavior is unacceptable.

Not caring how your behavior affects others can be considered selfish, but it really isn’t.  Why?  As one ages, it requires more time and energy simply to accomplish necessary daily activities, not to mention the extra effort needed to undertake the unfamiliar.  Aging requires you to focus more time on yourself. If you take time before reacting and stay focused on other’s reactions, you will not step over the line as often

If you feel the urge to pick out food from between your teeth, you are not alone.  Gums shrink and the spaces between the teeth get larger and more food gets stuck.

If you are a mouth breather, you will find that food often drops out of your mouth when eating.  Take the time to blow your nose when washing your hands before a meal so that nose breathing will be easier.

Drink a glass a water before each meal to fill up your stomach.  Don't wait to become starving before eating therefore gulping your food.  If you're not famished you won't feel the need to stuff food down at an abnormally fast pace.